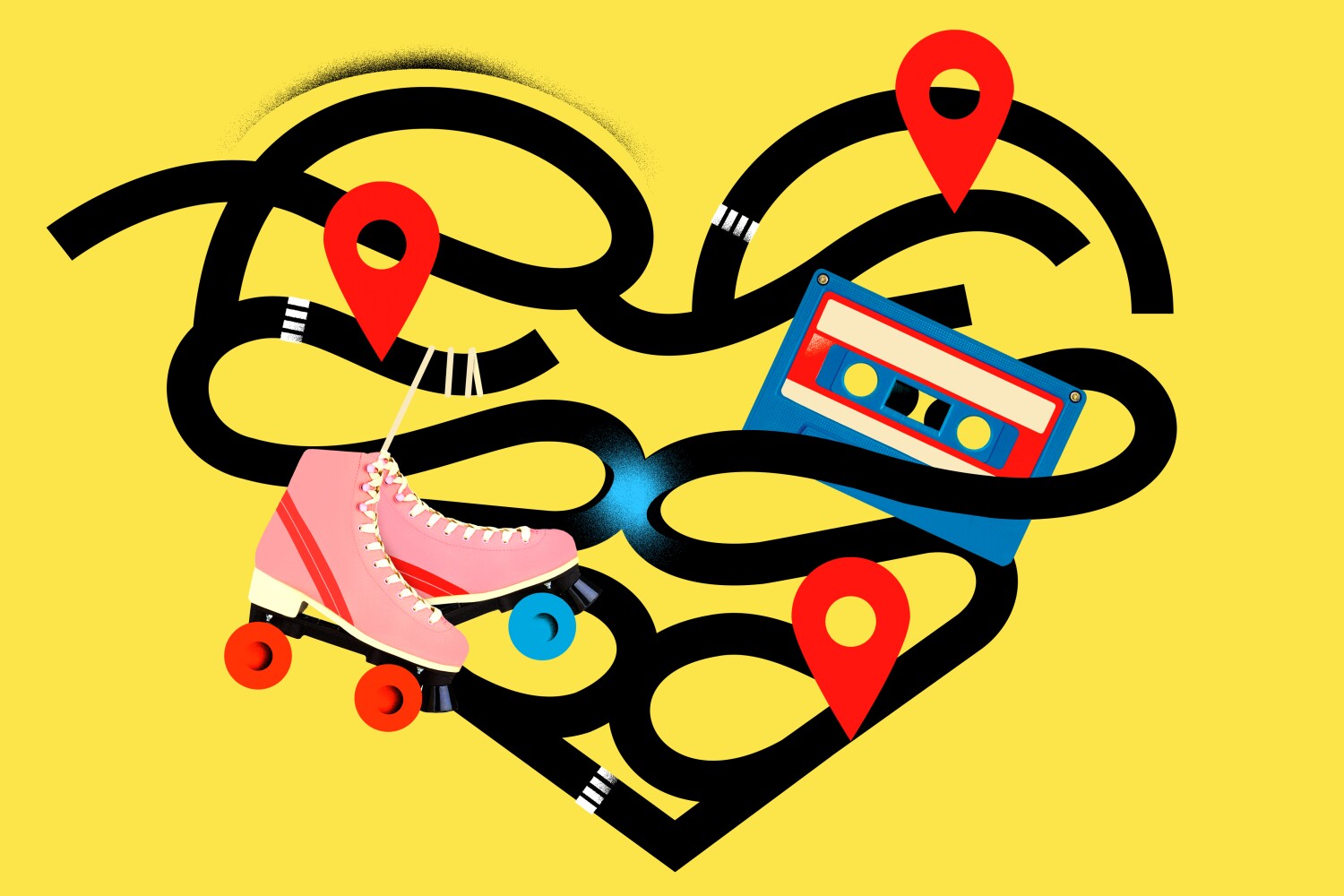 The first time Ronnie skated by me, I noticed her smile. The second time she flew by, I noticed her pretty eyes. On the third go-round, I’d like to say I saw her dimple, but my eyes were fixed on her tight jeans.

It was the late ’70s. Looking back on it, though, it felt like the two of us were teenagers in the 1950s. A sudden wave of nostalgia had swept over the country in those years. “Happy Days” was the No. 1 hit TV show, the 1978 movie “Grease” (also set in the ’50s) was wildly popular, and even disco songs were covers of old Glenn Miller tunes, like “Chattanooga Choo Choo.”

Ronnie and I went to movies, we roller skated, went out dancing and went to concerts and parties together. All the stuff that two teens do when they are dating. When picking Ronnie up for a date, I remember sitting in her mother’s living room in Montebello, forced to listen to the “Grease” soundtrack blaring from Ronnie’s bedroom while I waited. How I hated that soundtrack.

I wanted to become a radio DJ — the Mexican Casey Kasem.

So, in the late ’70s, I set out to rule the world of radio and TV. I never officially left Ronnie. We didn’t technically break up. I don’t recall even discussing my plans with her. As soon as I received the first job offer, playing 45 rpm records at an AM radio station in a tiny desert town, I packed up and left my home in Monterey Park.

I guess I was too stupid to see that everything I would ever need in a partner, I was right there in Ronnie.

In the many years that followed, I moved and lived and worked from San Francisco to San Diego, and from Los Angeles to New York. Ronnie began climbing the corporate ladder in the banking industry, and married.

We would look each other up and get together for drinks or conversation, usually every few years. We never lost complete contact, mainly because we had many friends in common.

Over the years, I wondered if we’d ever end up back in each other’s lives — romantically.

Our biggest roadblock was always timing.

The times that we’d drift in and out of each other’s lives, one of us would be involved in a relationship, or dealing with personal issues that made romance feel too far away, something. But because we were always friends first, over everything else, we would help each other get through those rough times and support whatever relationship the other was involved in.

This last time around, we have helped each other through what has been the worst period of our lives. Personally, financially, tragically.

It began a few years ago when I was talking to a mutual friend. I asked how Ronnie was doing, as I hadn’t spoken to her for a while. The next thing I knew, my phone rang. It was Ronnie — our mutual friend told her that I was living back in Southern California and that I was asking about her.

Over the next few weeks, we had several long conversations, catching up. Ronnie was going through a divorce. I was not actively seeing or dating anyone.

That was a first for us.

But I was actually back in Southern California to care for my mother, who had been diagnosed with dementia and Alzheimer’s, and was declining. Ronnie began joining me at my mother’s home in Monterey Park. I was struggling with some of my own health issues – I have high blood pressure and have had three heart attacks. Ronnie began helping me keep track of my own medications so I could concentrate on my mother’s care and medications.

My mother passed away in 2016. Ronnie held my hand through it all. I probably wouldn’t have been physically sound enough to attend my mom’s funeral had it not been for Ronnie’s help.

Sadly, about this same time, Ronnie’s mother was just beginning her own decline from the very same afflictions that claimed my mom. Dementia and Alzheimer’s.
The cost of round-the-clock care was insurmountable. Ronnie moved back in with her mother so she could care for her after the day nurses went home and before they arrived in the morning. Ronnie did this while also working a full-time job as a banking executive.

It was my turn to hold Ronnie’s hand.

During the day, I’d run errands for Ronnie, such as picking up her mom’s medications. In the evenings, while Ronnie looked after her mother, I’d come by with dinner for the both of them, or prepare a meal in her mom’s kitchen. On particularly bad nights, I’d stay overnight and watch her mom so Ronnie could get some rest. When she’d leave for work in the morning, I’d have her coffee ready and her lunch packed. Anything to ease the stress on Ronnie as she cared for her mother in the final months of her life.

Somewhere during all of this, the absolute worst period in both of our lives, Ronnie and I fell back in love.

And then, it was finally our time.

After 40 years of love and friendship — and most of that time spent miles apart — we discovered that we still complemented each other. We love the same music, appreciate the same types of art and have the same silly, naughty, stupid sense of humor. We like to dance for no special reason. We can forgive each other’s bodily malfunctions.

Ronnie’s mother left her Montebello residence to Ronnie and her sister. I recently bought the sister’s interest in the house, and moved in. Ronnie and I are now making it our home, as newlyweds.

We did put one untraditional new twist on a marriage that has been decades in the making. Ronnie’s last name is Keating. My last name has always been Soto. When we married last spring, I decided to show my gratitude to Ronnie for all she’s brought to my life by taking her last name as mine.

The other evening, after dinner, we settled down in the living room — the very same living room where I’d pick her up for our dates back in high school. Because I know Ronnie loves it, I had that corny old “Grease” soundtrack playing in the background.

I threw my arm around Ronnie and kissed her. And then we, now-60-somethings, danced away the rest of the evening.

You know, when Ronnie is singing Olivia Newton-John’s “Hopelessly Devoted to You” in my ear, it’s not such a bad song after all.

The author is a former radio personality and voice-over artist.

LA Affairs chronicles the search for romantic love in all its glorious expressions in the LA area, and we want to hear your true story. We pay $300 for a published essay. Email LAAffairs@latimes.com. You can find submission guidelines here. You can find past columns here.