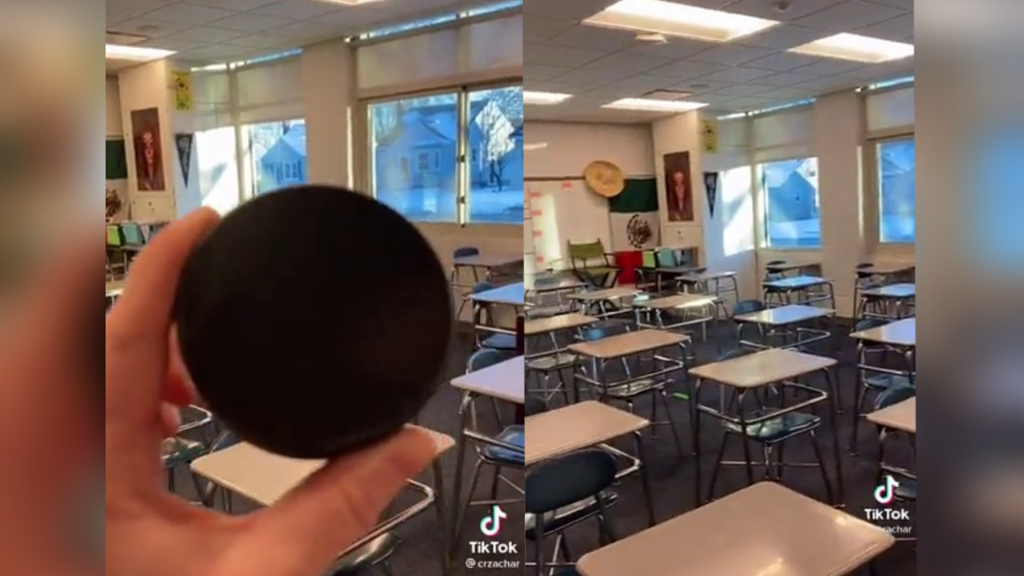 A video published by a Michigan school teacher went viral on TikTok and Twitter, sparking renewed debates on gun safety in the United States. In the video, the teacher shared a tip for how she prepares for an active shooter situation in her classroom – by taping hockey pucks under each of her students’ desks to be used as weapons in a worst-case scenario.

Spanish teacher Carly Zacharias, who goes by @crzachar on TikTok, posted a video on January 3, describing one way that she tries to keep her students safe in the case of an active shooter at school. The video, which amassed more than 2 million views, has since been deleted from TikTok, but was reposted on Twitter as well.

A Michigan high school teacher made a TikTok video to show other teachers how to tape a hockey puck to each student’s desk to fend off an active shooter.


“Hey teachers. So if you’re like me, you’ve probably been doing a lot of thinking recently about your school safety, ”Zacharias says in the video.

Zacharias shows us around her classroom, focusing on potential escape routes and entry points.

“I had these big windows along my back wall. My kids know that Plan A is always just to get out of that middle window and run across the street, ”she explains.

“But of course Plan B is barricade the door and fight, you all know this,” she says. Zacharias explains that her door is made of wood and has a large window in the middle, making it more difficult to block.

Her solution? To buy 30 hockey pucks, bring them into school and tape one under every desk in her classroom, so that each student will have a potential weapon to throw at a shooter who tries to enter.

“They can really hurt you – especially 30,” she says, adding that the strategy is just a deterrent, but still contributes to students’ sense of security.

The strategies that Zacharias describes follow along with the U.S. Department of Homeland Security’s response plan for active shooter scenarios.

The first plan of action, according to the DHS booklet, is to look for potential evacuation routes. If this isn’t possible, it’s recommended to hide out, barricading any places where the shooter may enter. If both of these plans fail, the last resort is to take action against the shooter, acting aggressively and using weapons.

Zacharias says her hockey puck idea allows students to be prepared for the worst-case scenario – in case a shooter is able to enter the classroom.

US schoolchildren are taught to practice these responses in regular active shooting drills at 95 percent of public schools. Teachers and students are told to turn off classroom lights, lock the doors and shelter in place under desks, keeping quiet until they are given the all-clear. In some schools, students are taught how to stack up chairs to block a shooter or how to run in a zigzag pattern to avoid gunfire.

These active shooter drills have been the subject of controversy, however, with some critics saying the drills cause psychological damage to students and do little to keep them safe. Active shooters who are aware of these routines can also use them to their own advantage.

This viral video, shared to TikTok and Twitter, elicited numerous outraged responses from people in the United States and around the world, who decried the necessity of a teacher spending her own money to prepare for a school shooting. Others shared other ideas for makeshift weapons, like golf clubs or insect spray. One teacher shared her classroom’s plan of using a chair to break a window and covering the broken glass with a blanket in order to escape to safety.

There were 34 school shootings in the United States in 2021. In November 2021, a student killed four people and injured seven others at a high school in Oxford, Michigan, the most deadly school shooting in the US since 2018.